Keep bringing in the Light

Historical times that we are currently experiencing. The world is definitely in a fundamental change – people are waking up.

The worldwide meditations two weeks ago contributed to this, although they were massively attacked ... before, during and afterwards.


Unfortunately many Lightworker groups (e.g. on Facebook) are still infiltrated, which of course cannot be stopped a 100%, but admins can spot infiltrators and act accordingly, if they find any.

In the run-up to the meditations, videos were produced to present mass meditations as dangerous. Many of them were tried to be placed into Lightworker groups to make people insecure in order to prevent them from participating.

There were also discussions that people are not participating in MMs because they’re supposed to be "against" COVID-19, and everything that is "against" something is not in “Light and Love” and cannot be in the “Highest Purpose” and so forth and so on ... Lightworkers probably know these discussions.

I don't want to go into this in detail, just again this much: it is scientifically proven that mass meditations with positive intentions also have a positive effect on the physical environment:

And as far as this "against something" issue is concerned, much of it is simply quibbling, much of it was taken out of context (in fact, the main goal of most MMs was  the harmonization of the events!) and even when something is done “against” something ... of course this will work too, you can also order from the Universe/Source that a certain situation is avoided... the Universe/Source is not "stupid" (to put it exaggeratedly), it will not send you more of the bad things if you make it very clear that you “don't want bad things to happen” (but again, this would be a completely separate topic).

Many such discussions are pointless, as the other party will not be convinced of the opposite anyway – they literally rob you of your energy (which is also be a sign of an attack/infiltration) and keep you from doing more important things (like sharing links or create videos for MMs).

A clear sign of infiltration is when you have people in your (Facebook) group who do not post anything for months, sometimes years, until there is a MM. Suddenly such people are activated like sleeper cells (often through Archons) and are spamming groups participating in MMs with negative comments or links to such videos as mentioned above, which present MMs as dangerous. After the MM they wouldn’t post anything for months again... clear signs of infiltration, so happened in many Lightworker groups on Facebook or on Instagram two weeks ago, admins should act immediately if they spot such activities.

However, these disruptive actions in advance could not prevent the success and the enormous number of participants in the MMs – although attacks also happened during them, and also afterwards. It is usually the case that at the same time as major mediations take place certain physical and also non-physical groups of Dark Ones will begin to ritualize in order to counteract such meditations.

These attacks are usually very strong in the beginning, but the more people join the meditation, the brighter and stronger the Light becomes and overlays these attacks.

Nevertheless, many Lightworkers (especially Key Lightworkers) can still be attacked, because the Archons go completely berserk during and after such meditations.

That is why it is important to protect yourself energetically and after a MM to consciously separate yourself from it and all other external energies/external connections during an own meditation (and no, this doesn't mean that MMs are dangerous, it's because they are so effective that the Dark Ones will do everything to stop them or at least to take revenge on certain Lightworkers for participation... but if you protect yourself properly, it will not become too much of a problem).

It’s also a good idea to mentally seal all energetic portals that lead to oneself as well as to mentally erase all energetic traces that one has left on the non-physical planes (so that you cannot be traced back by the Archons) and to recharge yourself energetically, for example by going out a lot into nature or connecting with the Prime Source or the Goddess during a meditation, or by chanting or whatever other methods you use to recharge yourself energetically.

Another reason for attacks is the fact that, out of fear of the incoming Light, the top echelons of the Dark Ones crawled under the Earth's surface, where they are constantly ritualizing now.

These rituals create negative entities on the non-physical planes, which are then released into the Grid to attack Lightworkers. They virtually conjure up hell and inject it into the Grid to make it as difficult as possible for the Light Force.

But that still doesn't change the fact that the wind has already turned, and the meditation was definitely a game changer.

The plan of a NWO with forced vaccinations and microchips is disintegrating live in front of our eyes, no matter how much propaganda they might make for it. 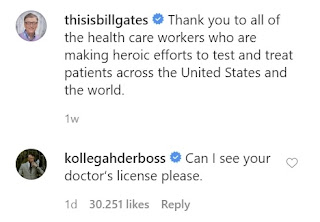 The number of people waking up is now so large that the social media accounts of Bill and Melinda Gates have all their hands full with deleting critical comments (which by far exceed positive comments). 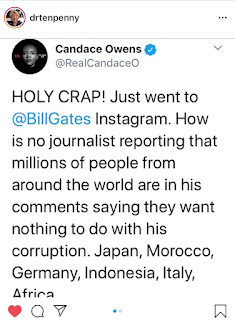 Also the plan to use influencers and celebrities on social media to make propaganda for mass vaccinations turns out to be a boomerang, because the commentary columns are just full of critical comments too, and many influencers/celebs already had to withdraw their videos.

That's why the Cabal is now getting its major Illuminati artists (led by Stefani Joanne Angelina Germanotta aka Lady Gaga) out of the moth box, organizing a big virtual concert this weekend:

The problem is that more and more people do not respond too well to Propaganda and Satanists, see Microsoft's advertising for Mixed Reality featuring Marina Abramovic:

Reason for this are also great documentaries like this one:

The mainstream narrative that COVID-19 was created naturally and has nothing to do with a bioweapon is also becoming more and more unstable (even if much of it is counter-propaganda and mudslinging, but it’s about bringing out the idea that the virus could be artificially created as well as spread intentionally):

The 5G issue is also causing tensions, with some citizens taking the issue into their own hands:

As you can see, there is a tremendous crackling inside the Grid as more and more people are waking up now and not putting up with things anymore.

Of course the goal is to bring everything harmoniously across the stage, however, the awareness and resistance has passed a critical point, which may cause natural tension in correlation with the suppression through the Grid.

In the meantime, most of the Dark Ones have literally moved into the basement of the planet, which is good, because In Feng Shui, the basement also represents the past, everything above represents the future, and in that case it would be the ships of Galactic Confederation in the skies (which are closer now than some might imagine).

So keep bringing the Light in, be aware things can still get very chaotic, so stay centred and calm, we are definitely heading in the right direction … and we definitely can make a difference!