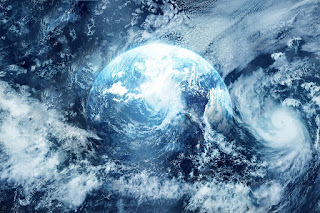 Since the last entry has caused some fuss; I'll start with a brief follow-up explanation regarding the pulling out of Soul Parts from surface incarnated Starseeds:

First of all, this doesn’t affect all Starseeds. Primarily it is about the more fragile Souls, who have an extremely hard time dealing with the attacks inside the Grid. It doesn’t affect Soul Parts, which are strong enough to deal with the situation (like in Lightwarriors).

Second, the complete Soul is never in the body anyway (too gigantic). You decide yourself in the consciousness of your Higher Self, which parts go into the Avatar, and the HS also decides which parts, in the sense of the bigger picture, go out or are exchanged.

Third, the ascension of the Soul Parts precedes the Ascension Process into 5D. If the Soul Parts are already on the ships or far outside the planet on a non-physical level, then this will inevitably also lead to the fact that it will manifest itself in the material world ... i.e. Event, First Contact, release from Quarantine etc.

And the fourth, last and most important point, it is a precautionary measure of the LFs, because if, for example, the Earth/surface population would be destroyed/wiped out by the detonation of Exotic Bombs, a World War, or the latest visible attempt, a worldwide pandemic, and the Soul would be still surface-bound to a large extent, then it would suffer extreme damage through such an event, so that only returning to the Source could help to recover, but from there on, the Soul would have to start all over again in its development process.

Billions of incarnations and lives of ones Soul in these and other universes would be in vain in an instant. Of course this must be avoided. That was also the leverage of the Chimera and Archons over the Galactic Confederation to hold this planet hostage for so long.

It is therefore a precautionary measure + it is part of the Ascension Process, in this phase in which the hidden war for the Liberation of the Planet becomes more and more visible through measures like the Cabal’s artificial release of a genetically modified virus.

Since this virus has now reached Italy, mass meditations continue to be called for in order to harmonise things:

It is also recommended to extend the meditation to further affected countries like Iran or South Korea:

At least the Cabal offer us "their" antidote right away:

After the research was supported by donations from a certain foundation:

Thanks to the talent to "anticipate" certain things:

As well as simulating an outbreak a few months prior to the real one:

But perhaps they’ve just read this 40-year-old (play)book in which the outbreak was predicted: 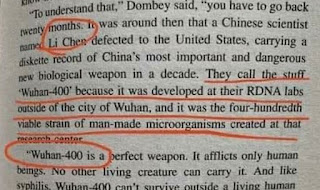 Although the virus apparently had a different name in the original edition of the book (and with the media trying to play down the whole circumstance), the name was changed to "Wuhan-400" in a later version, still long before the actual outbreak (mathematical probability that this is all coincidence? We live in the Matrix. Events are often announced in advance):

One of the largest shareholders of the pharmaceutical company that now produces the antidote is BlackRock:

In 2009, BlackRock also bought the British  multinational investment bank Barclays, whose boss had just been targeted by the British authorities due to his connections to Jeffrey Epstein:

This case, however, as well as the boiling up of the involvement of the British (non-)Royal Family in the Epstein case, as well as Harry's escape from England, and the Brexit, may or may not be physical signs of the clarification of the St. Michael’s Ley Line, which took place on British Isles during last year:

Back then, many storms in this geographical area of the world occurred, just as currently in the past few weeks across Europe and also worldwide:


Not triggering these storms, but using them to get certain things done on the higher plains, the Pleiadians right now are running a campaign that they call "Operation Storm", whereby I can't say more about that right now.

The situation on the surface remains tense due to the rising energies, not only because of the CV.

The totalitarian measures taken by governments controlled by the down falling Cabal will be becoming more and more apparent. And the division into political left and right is being driven forward by strategy of tension:

There will be more false flags. The Dark Ones are trying to keep their grip by creating a loopback to the Nazi timeline, still making use of the trauma and resulting guilt cult of that time.

They will provide actual MK-Ultra controlled (and now dead) Patsies, with prefabricated and confusing manifestos (as in the Christchurch shooting), which are also supposed (apart from political power and division of society) to have the effect of not only pushing people who deal with so-called “Conspiracy Theories” (like UFOs, MK-Ultra, Secret Underground Bases, Child Abuse etc. ) into the right corner, but also equating them with crazy mass murderers now:

At the same time, the Dark Ones have also ramped up the irradiation of the surface population in order to add fuel to the fire. In places where there are physical radio towers, there are usually similar constructions on the plasma levels and above, which are used for mind control.

At the moment, it seems that the aggression potential of the people should be increased in order to promote the division, maybe to create riot-like scenes in the streets or military tensions.

We have to see how things develop in the China-US conflict now.

The situation around the Goddess Vortex in Syria also remains in focus.

So things continue to come to a head, and as Starseeds it is again important to stay calm, to stay centered.

The LFs have been focusing a lot on plasma spiders lately, and these entities have some sort of "dead man's switch" so that when they get neutralized, at the last moment they would like to pump a large amount of Anomaly into the Grid (like an octopus releasing ink into the water), which would trigger their earthly lackeys to do all sorts of crazy stuff, as we are experiencing right now in this delicate phase. That's why the LFs approached this with caution, almost with surgical precision, but still radical when the chance is there.

There are reports from members of SURFACOM that in the past weeks the Chimera even wanted to present themselves to them as golden, almost ascended beings on the non-physical plains, probably to somehow turn the corner at the last moment.

However, there will be no spiders in paradise, I can assure you that. 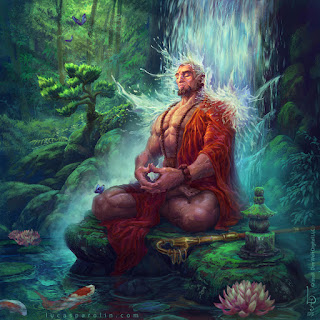 To conclude, once again, keep calm through the Storm ...